home / News / In The Field / Steam Trap and Insulation Surveys 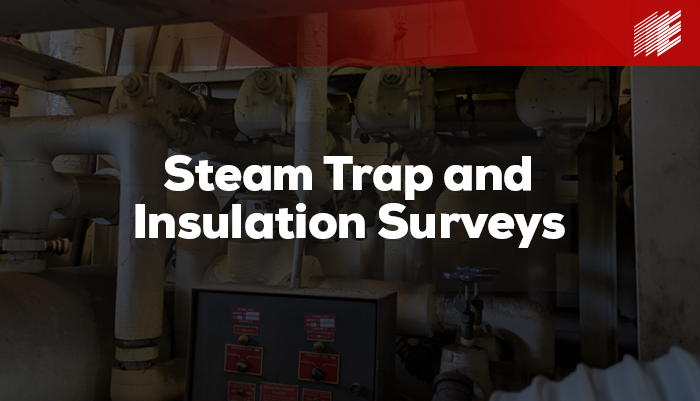 Encorus Group’s Mechanical Integrity Group offers steam trap and insulation surveys to increase the energy efficiency of buildings. Steam traps are used in steam transport systems that transfer heat through large buildings. Boiling water is used to create the steam, which is then transferred from the boiler to pipes that allow it to heat different parts of the building through radiators. As the steam is transported through the pipes, some of it cools and condenses into water. Small devices that open when they sense water, called steam traps, are utilized to remove the condensate water from the pipes to keep the system running effectively.

Steam systems in larger buildings can contain hundreds of steam traps, which could malfunction and fail to remove condensate water from the pipes. This malfunction is caused by a problem with the sensor on the trap. The sensor does not detect when steam has returned, and does not close, leading the steam to be wasted in the condensation collection system and causing a loss of heat.

Another cause of heat loss is poorly insulated piping. Heat is lost when pipes do not have enough insulation to keep the heat contained while it is being transported throughout the building. This means that more steam must be produced and transferred to provide the same amount of heat as well-insulated piping.

Both malfunctioning steam traps and poorly insulated piping cause the system to lose heat. This situation also leads to a loss of money. Natural gas is bought and used to heat the boiler, which then produces steam to heat the building. When a building needs more heat, the boiler has to produce more steam, which means that it needs more natural gas to heat the water.  This can become an issue in the colder months, when heat is necessary to keep other pipes from freezing. If the problem with either the steam traps or piping insulation can be identified and fixed, the facility can reduce its steam consumption, thus reducing overall energy costs.

Encorus provides steam trap and insulation surveys to avoid heat waste and increase energy efficiency. The Mechanical Integrity Group also offers energy efficiency studies to show how much money could be saved if the faulty steam traps and piping insulation were repaired based on the facility’s cost of producing steam. If you require a steam trap and insulation survey, contact Director of Mechanical Integrity Keith Taylor at (716) 592-3980 ext. 143, or [email protected].