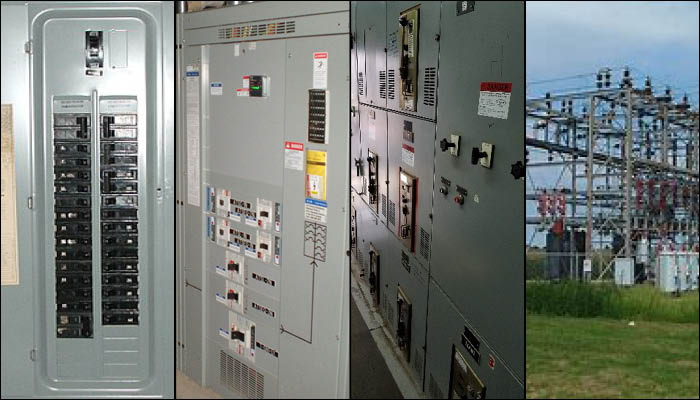 Power distribution is accomplished with a variety of different types of equipment, with varying sizes and applications. Many people use the terms substation, switchgear, switchboard, panelboard, distribution panel, power panel, breaker panel, lighting panel, and others, to describe these devices, often applying the “wrong” term. Encorus engineers offer the following guidelines to clarify the “proper” terms for the various distribution equipment, as defined in the 2017 National Electrical Code® Chapter 1, Definitions. Extracts from the code are in italics, and items are listed in ascending order of size / capacity.

Panelboard. A single panel or group of panel units designed for assembly in the form of a single panel, including buses and automatic overcurrent devices, and equipped with or without switches for the control of light, heat, or power circuits; designed to be placed in a cabinet or cutout box placed in or against a wall, partition, or other support; and accessible only from the front.

Panelboards are the smallest of the types, and are frequently divided into two categories:

Prior to the publication of the 2008 National Electrical Code®, the distinction between these two panelboard types was described in Articles 408.34 and 408.35. These articles were removed from the 2008 code. It will take time for the industry to adapt to this change and many electrical professionals still make this distinction.

Switchboard. A large single panel, frame, or assembly of panels on which are mounted on the face, back, or both, switches, overcurrent and other protective devices, buses, and usually instruments. These assemblies are generally accessible from the rear as well as from the front and are not intended to be installed in cabinets.

Switchgear. An assembly completely enclosed on all sides and top with sheet metal (except for ventilating openings and inspection windows) and containing primary power circuit switching, interrupting devices, or both, with buses and connections. The assembly may include control and auxiliary devices. Access to the interior of the enclosure is provided by doors, removable covers, or both. All switchgear subject to NEC requirements is “metal enclosed”. Switchgear rated below 1000 V or less may be identified as “low-voltage power circuit breaker switchgear.” Switchgear rated over 1000 V may be identified as “metal-enclosed” or “metal-clad.” Switchgear is available in non–arc-resistant or arc-resistant constructions.

Switchgear is generally larger than switchboards, and of very robust construction. Metal-clad is a higher rating than metal-enclosed, and implies “rack-out” design, where a mechanism is provided to remove switch elements (breakers) from the gear for service or replacement. Rating range typically 1500-4000 amps. Found in utility, heavy industrial, and very large commercial installations.

Substation. An assemblage of equipment (e.g., switches, interrupting devices, circuit breakers, buses, and transformers) through which electric energy is passed for the purpose of distribution, switching, or modifying its characteristics.

Substations are the largest setups of electrical equipment, feeding entire distribution areas, large industrial plants and other large loads. Another common term is “Unit Substation”, which generally describes a transformer and switchgear provided as a packaged unit. These are usually rated in KVA as opposed to amps, ranging anywhere from 500KVA up to utility scale in the thousands of KVA.

Hopefully this helps to clear the clouds from all these different terms and improve understanding of the electrical world around us.