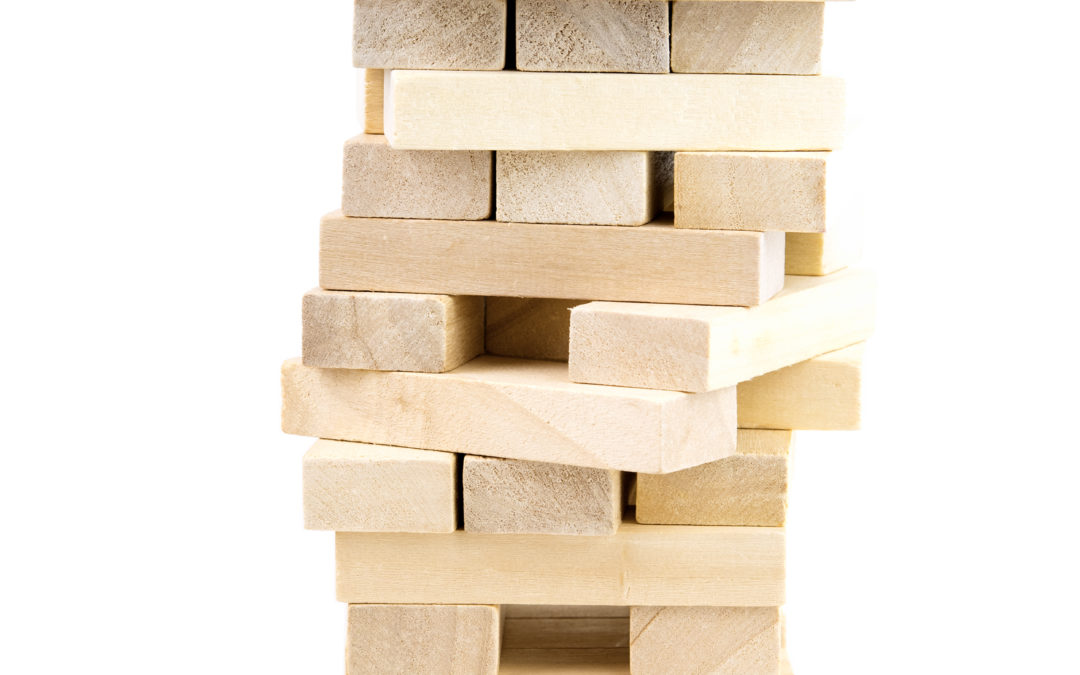 The 5 Structural Engineering Principles Of Jenga

The first concept that Jenga portrays is loading, which is the idea that a part of a structure supports the weight of another part or the rest of the structure. In Jenga, no two blocks are the exact same dimensions, therefore it is possible to remove loose blocks that do not rest evenly on each other. These blocks do not hold any of the weight of the rest of the structure, meaning that they are not load bearing. Structural engineers need to determine a load path so that the entire structure supports the weight from the pressure being exerted downward. The How Stuff works website tells us that there are three types of loads: dead loads, which are the “forces applied by all of the static components of the structure, like beams, columns, rivets, concrete, and drywall”; live loads, which are “the forces applied by all of the ‘moving’ elements that can affect a structure, including people, furniture, cars, and normal weather events like rain, snow, and wind”; and dynamic loads, which are “live loads that occur suddenly with great force. Examples are earthquakes, tornados, hurricanes, and airplane crashes”. When designing a structure, structural engineers need to perform calculations to ensure that all of the load bearing elements can support all three types of loads.

Jenga also portrays concepts relating to foundations. When setting up the game of Jenga, one should consider the surface upon which they want to build the tower. Unstable or uneven surfaces are a poor choice that would lead to the eventual collapse of the tower. Sturdy surfaces, such as a flat table or a hard, level floor, would be a much better choice to ensure the tower will not fall unprompted. This same concept applies to buildings and other structures. Structural engineers must be mindful of the foundation where the structure will be built. Foundations that are too fluid or too hard will lead to damage or collapse of the structure. Sufficient foundations should transfer the load into the ground, relieving the pressure from the bottom tier of the structure.

Tension and compression are two structural engineering concepts that can be observed in Jenga. According to the How Stuff Works website, compression is the “force applied when two objects are pushed together”, and tension is the “force applied when an object is pulled or stretched”. In Jenga, once a wooden piece is removed from the middle, it essentially becomes two columns with a beam across them. The beam experiences both tension from the from the columns below and compression from the pressure of the other blocks on top of the beam at the same time. When considering compression and tension, structural engineers must also consider what materials would have the appropriate tensile strength to effectively support the structure. Tensile strength is “the maximum force that can be applied to a material without pulling it apart”. Jenga uses wood for the pieces instead of rubber or a different material because it has the appropriate tensile strength and characteristics to support the tower structure for the game.

Rotational force can be found in the game of Jenga through the concept of maintaining rotational equilibrium. This is the idea that the taller the structure, the wider the supports at the bottom should be to reduce movement. In Jenga, once a bottom support is removed, leaving only a single piece rather than two, the tower becomes increasingly unbalanced and susceptible to falling due to small movements or changes in pressure. The same applies to buildings and other structures. If a tall structure relies on a narrow base, it will not be as stable as a tall structure that sits on a wide base.

Jenga also displays concepts that occur from earthquake forces, which is something that structural engineers need to consider if they are designing a structure in a seismically active area. When seismic activity occurs, structures can experience lateral and vertical vibrations, which could cause the structure to move. The stability of structures throughout seismic vibrations can be attributed to even weight distribution throughout the entire area. In Jenga, if you have more blocks toward the top of the tower and you bump the surface it sits on, the tower is more likely to move than if there were more blocks at the bottom rather than the top.