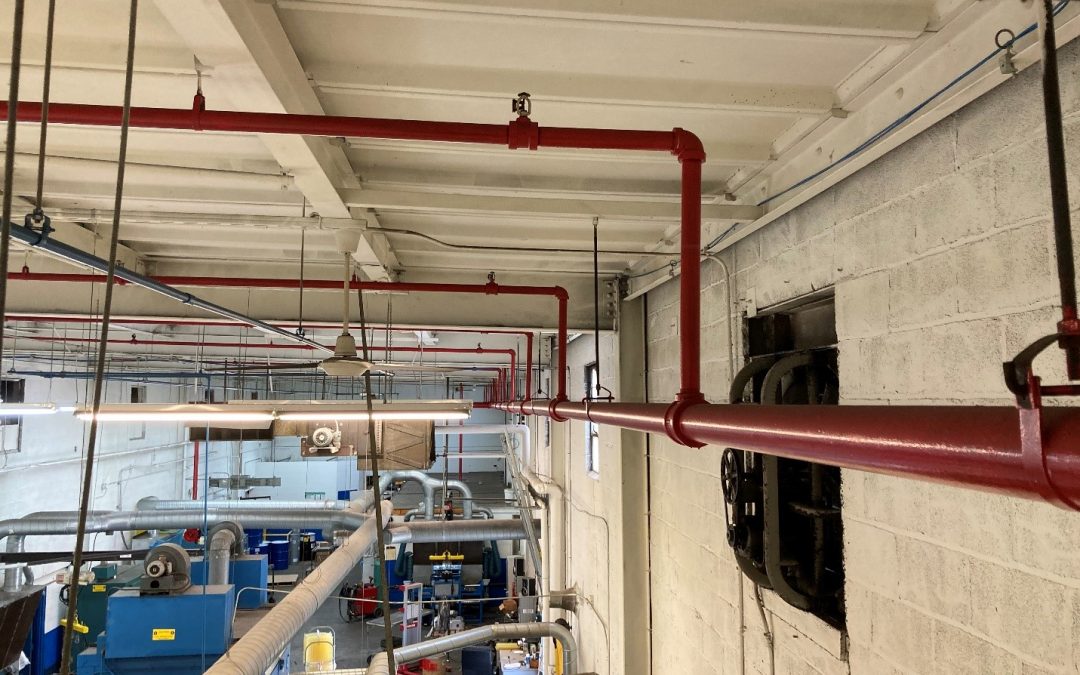 When someone hears the term “fire suppression system”, they might automatically think of a sprinkler system that sprays water from the ceiling when it detects fire. In reality, there are several different types of fire suppression systems that can be implemented depending on the space needing protection and other conditions.

A wet-pipe sprinkler system is the simplest and most widely used type. The term “wet-pipe” just means all of the sprinkler piping is filled with water at all times. In the event of a fire, the automatic sprinkler head opens, and water is distributed onto the fire.

Dry-pipe systems contain no water in the pipe until a sprinkler is activated by a fire. The pipe is pressurized with air or gas which “holds the water back” at the dry-pipe valve. Upon activation, the sprinkler head opens and releases the compressed air that was inside of the pipe. With the pressure loss, the dry pipe valve at the sprinkler riser will open to allow water into the system. As a result, water will then be dispersed from the sprinkler head(s) to put out the fire. Dry-pipe systems are used in areas that are subject to water freezing in the pipes. These areas include parking garages, unconditioned attics, warehouses, and loading dock spaces.

A pre-action system functions similarly to a dry pipe system in that the sprinkler piping is also filled with air or other types of gases. The difference with this type of system is that it requires additional sources of activation before water flows through the piping. In a single interlock set-up, upon initial detection of heat or smoke, the pre-action valve opens to allow water to enter the sprinkler piping. From there, sprinkler head(s) will still need to be activated by a fire in order for water to be dispersed. In some cases, a double interlock system is used for an additional layer of protection. In this type of set-up, water will not enter the sprinkler piping unless both the pre-action valve opens and a sprinkler head is activated. The double interlock is a better option when protecting against accidental discharge, but the response time is much slower compared to a single interlock. Both of these pre-action sprinkler systems are used in areas where accidental discharge would cause expensive water damage to property or equipment, such as IT and electrical rooms.

Clean agent systems do not utilize water as a source to fight potential fires in the areas they protect. Instead, they disperse specialized gases to extinguish the fires. In order to reduce oxygen levels that fires feed off of, inert gases, such as nitrogen and argon, are sometimes utilized to lower oxygen levels in order to suppress the fire. Additionally, other types of clean agents that disperse oxygen and absorb heat are used. These clean agent systems are safe for buildings with human occupancy, do not harm the environment, and do not leave any residue behind. Because of this, clean agent systems are desirable in high value areas in which equipment would be ruined by water, such as electronics and electrical rooms.

These represent just a handful of the different types of systems used in fire protection. Many other fire suppression and sprinkler systems exist in the industry today, and each has their own importance based on their application. If you require fire protection engineering design, contact Director of Engineering Tom Gilmartin at (716) 592-3980 ext. 124, or [email protected]