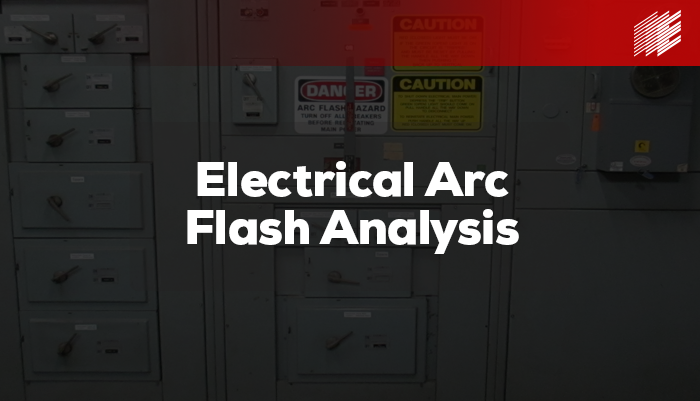 Electrical arc flash analysis is a service provided by Encorus’s electrical engineering department.   Arc flash analysis is a safety precaution used to prevent explosions in industrial settings which utilize high electrical voltage. When an energized wire touches another directly, this is known in engineering as a fault, and commonly referred to as a ‘short’.  When this happens, the flow of electrical current through the short has only the resistance of the wires from the generator to the fault to limit its passage.  Generally, this resistance is very low, so the current flowing in the wire rises very rapidly. This high current can cause the phenomenon known as ‘arc flash’.

Arc flash can occur when a very high current flows between two shorted wires.  As the current rises, high amounts of energy are released at the point of the short, and the wires start to melt.  As the wires melt, the current will jump the gap, which is known as an ‘arcing current’, commonly referred to as a spark.  The arc is made up of super-heated air known as ‘plasma’. The plasma can reach temperatures of 20,000 degrees.  As the arc forms and the temperatures rise, the metal of the wires begins to vaporize.  If the arc is sustained long enough, the vaporization of the metal can cause an explosion, which can approach the energy levels released by blowing up a stick of dynamite.  Because of this, circuit breakers are used to detect these high currents and open the circuit, which instantly cuts off the energy flow to the arc before the energy can cause an explosion.

The electrical systems of homes do not have a high enough voltage to create an arc that would result in an explosion. However, industrial settings do have a high enough voltage that arc flash is possible and engineers and electricians take precautions to mitigate these risks.  Electrical codes give standards and guidance for designing circuits to minimize the chances of arc flash, and electricians are trained to identify circuits where the danger is high.  Encorus engineers perform arc-flash studies on large electrical systems to find the areas of high risk, and design in precautions such as special arc-flash detectors or separate settings for use during maintenance. The design standards and guidelines, along with specialized training, have greatly decreased the risk of arc flash, making electrical systems safer for owners and operators.

Arc flash analyses are vital to the safety of people and equipment in industrial settings with high electrical voltages. If you require an electrical arc flash analysis, contact Director of Engineering Design and Electrical Engineer Tom Gilmartin, PE, LEED AP at (716) 592-3980 ext. 124 or [email protected].