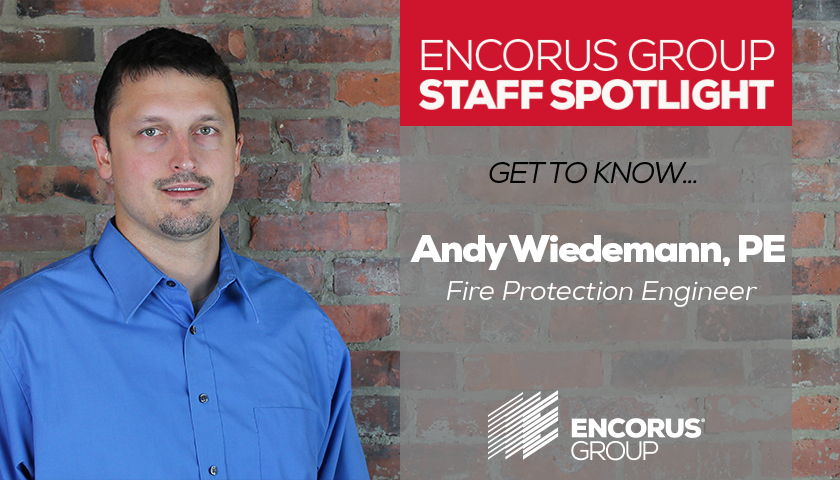 Andy Wiedemann, PE is a Fire Protection Engineer at Encorus Group. He started as a Mechanical Engineer, and in recent years has transitioned to take on the related role of Fire Protection Engineer. He has embraced this new post, and completed his PE exam in fire protection. His mechanical engineering background provides a unique and flexible skill set for fire protection design.

Andy went to high school in Springville and graduated from Alfred State College in 2009 with a Bachelor’s Degree in Mechanical Engineering Technology. He did not know what he wanted to do or if he wanted to go to college until later in his junior year of high school. He was taking a Design and Drawing for Production class using Inventor, and told his teacher that he enjoyed the class and was interested in pursuing a career involving that program. His teacher suggested the possibility of mechanical engineering. Andy assumed that mechanical engineering involved fixing cars, but nonetheless pursued an education in the field, which lead him to his current position at Encorus. Andy cited his great uncle, who is also a professional engineer, as one of his biggest engineering influences. He has always been very helpful and Andy remembers that he always stresses the use of the term “work with” as opposed to “work for” when referring to co-workers and team members.

Andy recently married his girlfriend of 8 years, Katrina, and they live in Springville with their two cats. Outside of work, he has been interested in video games throughout his life, and recently built his first PC. Andy has always enjoyed sports, particularly football and hockey with the Bills and Sabres close by, and spent several years playing club ice hockey for Alfred, and later in local adult inline hockey leagues with friends. He has also recently taken up new hobbies like kayaking and disc golf, and enjoys spending as much time as possible outside during the summer.