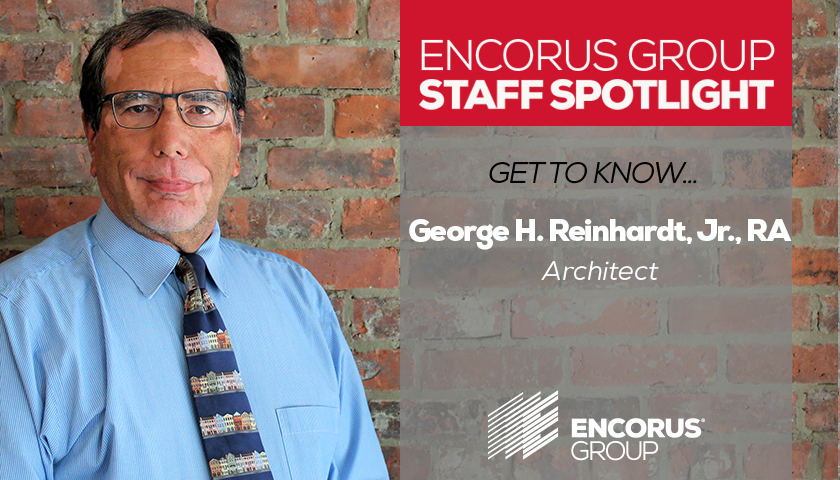 George Reinhardt has been a Senior Architect with Encorus Group for the past year. His interest in becoming an architect was enhanced by his high school programs, which included shop classes, drawing and architectural drafting. He then went to ECC North for Construction Technology because he was told that he first would have to learn how to construct buildings before he could design them. George then attended the Architectural School at the University at Buffalo, where he earned his Master’s degree in Architecture.

George’s biggest influence in life and the direction of his career came from his parents and his strict upbringing. His parents always thought he should have a direction in life, and then pursue it and never give up. George felt he was born with a natural talent for building and designing, as his father and his brothers’ careers included an architect, aerospace engineer, furniture designer and a wood worker.

He has designed and built a total of four homes, and currently lives in the final home he built in Colden. Throughout his career, he has worked for a diverse number of architects and contractors, which not only helped him learn how to design and build buildings but also how to deal with people, which he feels is very important. His architectural and construction career includes the M&T luxury suites at Highmark Stadium, Key Bank Center, Sahlen Field, Buffalo City School renovations, multiple projects for the Catholic Health hospitals and free-standing M&T Bank buildings.

George’s interest and enthusiasm for building and designing continues to this day, and he loves working with people and hopes to help young people continue with their careers in the building industry.