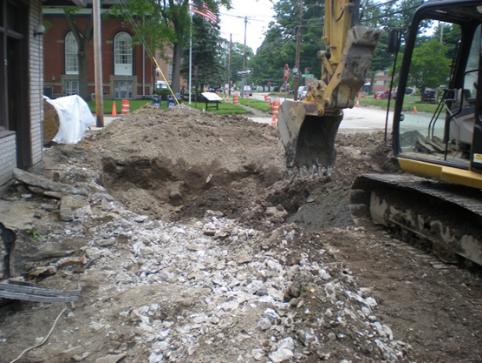 Encorus was contracted to provide support for the removal of three tanks discovered at 70 Franklin Street in the village of Springville, NY.

The property had previously been used as a gas station and automobile repair facility. The know tanks had been previously removed and the site cleared. Additional tanks were discovered, dating from the 1940’s which had leaked. This leakage did not appear in a previous monitoring well. Each tank was pumped out, removed, cleaned, and disposed of. Upon removal of the tanks, soil contamination was discovered, and suspect soils removed and sampled.

The values from the soil sample results were compared to 6 NYCRR PART 375 Environmental Remediation Programs Table 376-6.8(b): Restricted Use Soil Cleanup Objectives for Commercial Use. Encorus facilitated communications with the New York State Department of Environmental Conservation, Waste Management, the soil testing agency, and other interested parties. After the tank removals took place, Encorus was also contracted to facilitate the closure of a spill at the site with the NYS DEC.