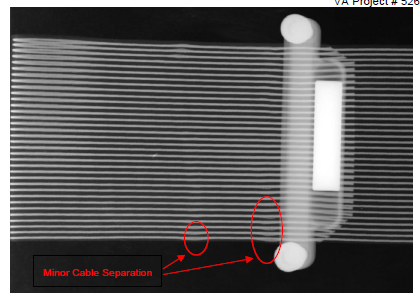 The client contracted Encorus Group to perform a root cause analysis on a ceiling lift that had failed in the spinal cord injury / disorder department of the hospital.

The trolley-mounted patient lift utilizes a metal fiber strap wrapped around a rotating drum as part of a system facilitating lifting and movement of patients to and from a bed, stretcher, chair, etc.  Each hoist is operated via a remote control unit, and has various emergency releases in case of power loss and / or failure to lower, as well as limit switches to prevent over-retraction of the strap.

The manufacturer had tested and inspected the failed unit as well as conducted independent analyses of potential causes.  Encorus Group was provided with three working units matching the make and model of the failed unit.  Encorus performed non-destructive testing on each of the lifts, including visual inspection, radiographic examination of the lifting strap to identify the condition of internal strap wires, functional testing of units to observe motion and verify function of components, and disassembly and inspection of internal components to verify that there were no broken or distorted pieces.  In addition, Encorus performed destructive testing on the units, including pull testing until failure at the drum end and the lift yoke end of each strap to determine its ultimate strength at each location.  A report detailing the findings and stressing the importance of routine inspection and maintenance was provided to the client.