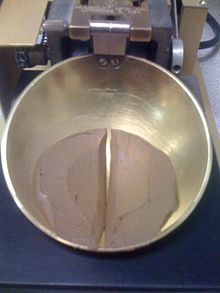 Atterberg Limits Testing is just one of the testing methods that Encorus’s Civil Testing Group uses to determine properties of soil. According to ASTM International, Atterberg Testing Limits are six limits of consistency in soils that were defined by Albert Atterberg. These limits include the upper limit of viscous flow, the liquid limit, the sticky limit, the cohesion limit, the plastic limit, and the shrinkage limit. In modern engineering, the term Atterberg Limits commonly refers to only the liquid limit, the plastic limit, and in some cases, the shrinkage limit.

The liquid limit of soil is the minimum amount of water that would be added to a set amount of soil to change its consistency to a liquid state, meaning that the soil cannot retain its shape. The liquid limit of soils can be determined by creating a paste using soil and a small amount of water and putting it in a liquid limit device. The paste is separated into two halves using a grooving tool, and then allowed to flow together from the shocks caused by repeatedly dropping the device’s cup in a standard manner. This process is repeated with different amounts of water in the paste and the results are plotted on a graph to establish the liquid limit.

The plastic limit of soil is similar to the liquid limit, but it is the amount of moisture that causes soil to display plastic characteristics rather than liquid or solid ones. The plastic limit can be determined using a rolling method where the soil sample with a recorded amount of water is rolled into a 3.2 mm thread and broken into smaller and smaller pieces until it cannot be re-rolled and broken down any more. This process is done twice, and then the average water content of both trials is calculated to determine that soil’s plastic limit. The plasticity index of a particular type of soil can be found by determining the difference between the plastic limit and the liquid limit.

According to the ASTM International Designation: D4318–17E1 , “The liquid limit, plastic limit, and plasticity index of soils are also used extensively, either individually or together, with other soil properties to correlate with engineering behavior such as compressibility, hydraulic conductivity (permeability), compactibility, shrink-swell, and shear strength”. These testing methods are crucial when it comes to determining what type of soil to use as a foundation for construction projects. The properties mentioned above will affect the soil’s ability to maintain its durability under different forms of agitation. Therefore, it is essential for construction professionals to test the soil before starting construction to ensure the long-term integrity of the structure being built.