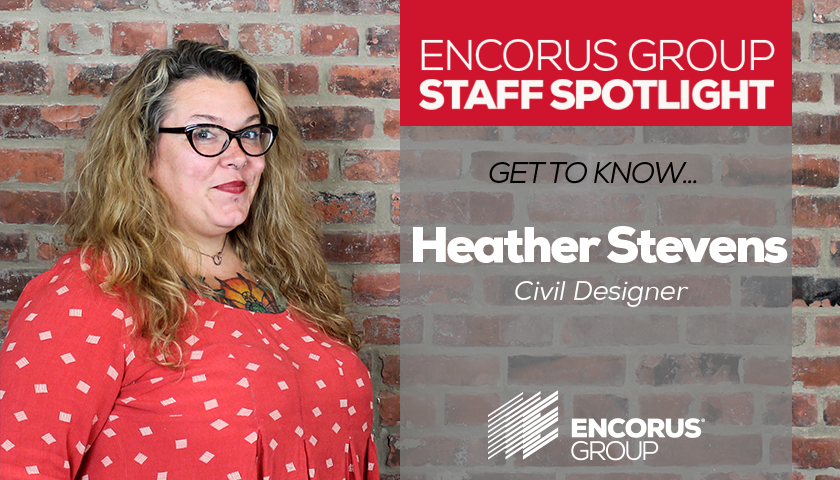 Heather Stevens was introduced to map reading, lettering and computers very early on in her life. This was largely influenced from her father, who ran his own design business out of their home. Initially, Heather wanted to become an English teacher, but chose engineering because she had the aptitude for it. She was good at math, detail-orientated and fascinated with how things work.

While living in Las Vegas, Heather was introduced to land development. She was working with home builders creating enormous communities in the middle of the desert. During this time, she learned how to grade the lot the house would be built on and worked on the utilities to the homes and the roads to get there. She even got to name a few streets! In 2007, Heather decided to move back home to the east coast. She moved around the country and had a lot of adventures before settling back in Western New York to focus on family.

Heather joined Encorus as a designer in January of 2019. She knew this was a great fit since her interview, and has not looked back. Each project has unique challenges, and with her diverse background, she gets to be involved with every discipline. She is always learning and feels motivated by her coworkers.

Heather has been married for 23 years and in her spare time, enjoys quilting and designing unique patterns to quilt and applique. She has been a Girl Scout leader for 8 years, archery instructor at summer camp, and is currently a town of Franklinville councilwoman. Heather says the fondest memory from Girl Scouts is taking her troop white water rafting at Letchworth State Park. They are a very active troop and she loves to encourage her girls to be themselves and believe in themselves, and she knows they can do anything they set their minds to.